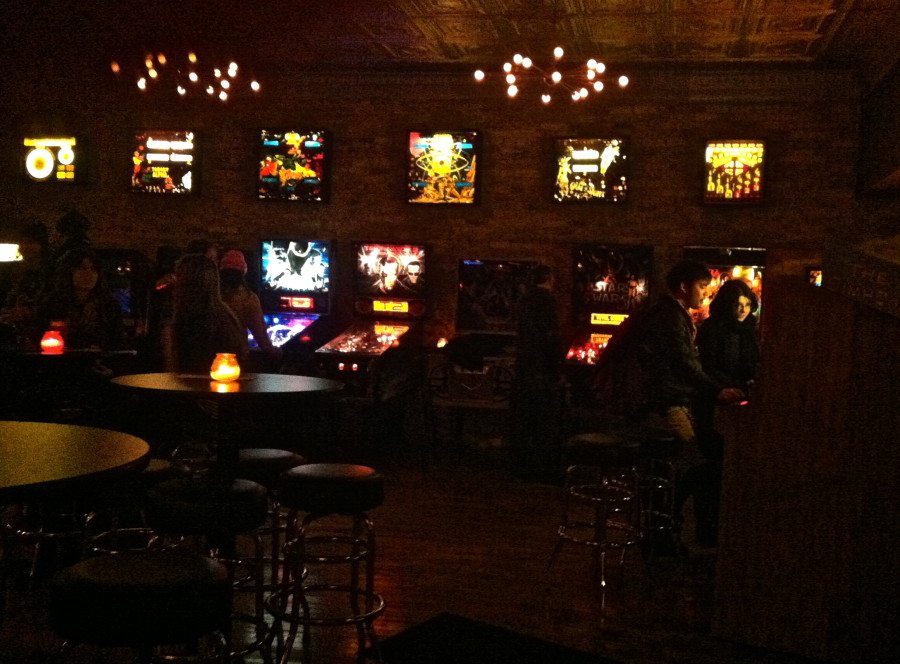 With its official opening this past Monday, Logan Hardware owner and arcade-game enthusiast, Jim Zespy, is bringing these games to the neighborhood in full force.

Patrons can sit at the bar or tables placed throughout the arcade’s seemingly endless game space or peruse the vintage game and pinball machines with ample space to walk around.

Zespy holds a long-time passion for buying and bringing back to life old, sometimes neglected games and pinball machines.

“I collect and restore these games. I’ve been a fan of video games and pinball for a long time, and it just kind of was a natural fit to let people play my games for free in the store,” he says over background noise of the games during the arcade’s opening night. “The games went really well with the record, so we did that and it was really fun. As we added games, it was really enjoyable. People seem to like the fact that it wasn’t just a record store, they like the fact that they can bring the family and hang out for the day.”

Logan Arcade, with its more than 40 video games and 25-plus pinball machines, is a unique space without loud music playing in the background or TVs showing sporting events on the wall. Patrons instead hear music from the games and the typical sound effects from the pinball machines. Although some people set foot inside the arcade space for the first time Monday, others have been visiting Logan Hardware for a while.

“I have some history with this place. I live a block away, and I used to come to the old Logan Hardware when it was a record store and arcade in the back,” says John sitting at a table in the back room of the arcade’s space. “I actually saw the lead singer of Fugazi play a show here at the end of the summer; the band played back in this corner; it was good.”

After getting past zoning and the necessary legal steps to opening a bar, Zespy relocated the record store and vintage arcade museum to Fullerton and Maplewood Avenues. The building, he says, had been on his radar since he moved to the neighborhood, but he never had a real reason to buy it until recently. A modest crew, including some friends of Zespy, then came together to rehab the building that now houses Logan Arcade.

“I’m proud of all the guys who came together to help me get this done. A lot of friends ended up helping me build this place, and more people came in as professionals, tradesmen and became friends in helping me do this. It’s a very small group of people,” Zespy says. “There’s a lot of people like Dan Sullivan, my buddy who’s a construction guy in town, general contractor; he knew I needed guys and if they had a dead day he’d be like ‘hey, I got three guys off, do you want them today?’ And I’m like, ‘Yes. Yes. Yes. Send them today.'”

Now the Logan Arcade has a comfortable arcade feeling that invites customers to try their hand at the different games or sit and socialize with friends. Among all of the games stands Zespy’s all-time favorite, Pin Bot.

“Pin Bot, hands down, is my favorite game. Barry Oursler, Python Anghelo,” Zespy rattles off the game’s designers. “If there was a fire, it would be, you know, my son and my wife and my cat, and then I’d come back in for Pin Bot. I would drag it out on my back. It’s just a perfect game. Just classic. It’s like Tres Hombres by ZZ Top. It’s just an undeniable perfect rock record. I don’t care if you’re not into pinball, you’ll like Pin Bot. I don’t care if you’re not into rock, you’re going to like Tres Hombres. It’s kind of like that.”

Logan Hardware served as the neighborhood’s vinyl and vintage hot spot, and Zespy says, he takes pride in the organic growth of his store and now arcade bar.

“I think it worked out really nicely because we really love this neighborhood because we’re from the neighborhood. Most of us live here, work here. My wife and I live upstairs. You know? There’s a lot of bars opening up, and I know that the community is sensitive to that. What worked out for us is I wasn’t some dude who was like, ‘hey what’s up, I heard that’s a hip neighborhood, I’m gonna start a bar there.’ I think that helped us a lot too because we are actually in the neighborhood and in the community we’re not just here to run a bar and make money off of people and peace out later.”