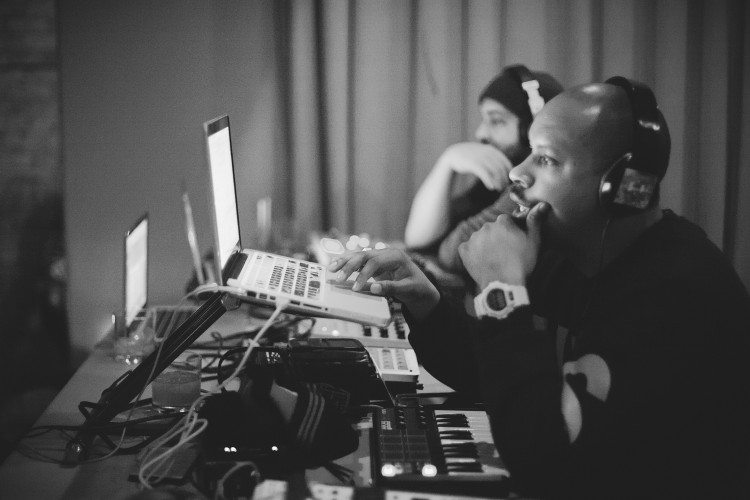 The concept for the event puts hip-hop producers and their beat making skills in the spotlight. Armed with electronic samplers and laptops, three Chicago producers take the stage and are tasked with crafting original beats on the spot. Two record collectors were on hand to assign the samples that would form the musical foundation for each beat. Fresh Roasted adds dimensions of improvisation and performance to the usual beat battle format wherein producers bring pre-recorded tracks to showcase.

Following this unique format, the samples selected by the record collectors are played for the crowd to hear and then recorded from the original vinyl source and loaded into the producers’ samplers. From that point the producers begin the process of chopping and looping the clips of music into an original beat.

At Thursday’s installment of Fresh Roasted, DJs entertained the crowd with a set of sample-worthy jazz and soul while the producers worked. After an hour and a half of rare and obscure musical treats from bygone eras, anticipation for the beat battle was high, and the producers finally revealed their creations to an appreciative crowd.

Based on the enthusiasm on display, it’s safe to say there were a few dozen avid hip-hop supporters in attendance, mixed in with The Whistler’s casual patrons. Winning over the crowd with his up-tempo, danceable beat, producer Uncle El took top honors Thursday night, and will defend his bragging rights when Fresh Roasted returns to The Whistler in early summer.

The bar and event organizer Alejandro Ayala have agreed to shows for this fall and spring as well.

A DJ and radio host, Ayala says he originally started the event as a one-off event, and says, “one of the [Whistler’s] owners loved the first edition of the party so much that he encouraged me to make it a regular event.”

The success of Fresh Roasted at The Whistler comes as no surprise, given the intimate atmosphere of the bar and its robust rotation of recurring live music acts. There may be no better place than The Whistler for a show like Fresh Roasted, because it’s small enough to create a feeling of connection with the performers, while providing an ample stage and plenty of seating. The Whistler is chic yet welcoming, making it an ideal environment for friends and fans of Fresh Roasted to meet, mingle and talk hip-hop.

Ayala is already working on ideas for the next show, and says he’d like to incorporate live instrumentation or even a full band, which could give the event a broader appeal. This would create an opportunity to introduce hip-hop production as an art form to an even bigger audience, which has always been Ayala’s vision for Fresh Roasted.

“I’m happy to share the music I love most,” says Ayala, “and even happier to share the creative aspect live.” The next Fresh Roasted event will be held at The Whistler on June 4.