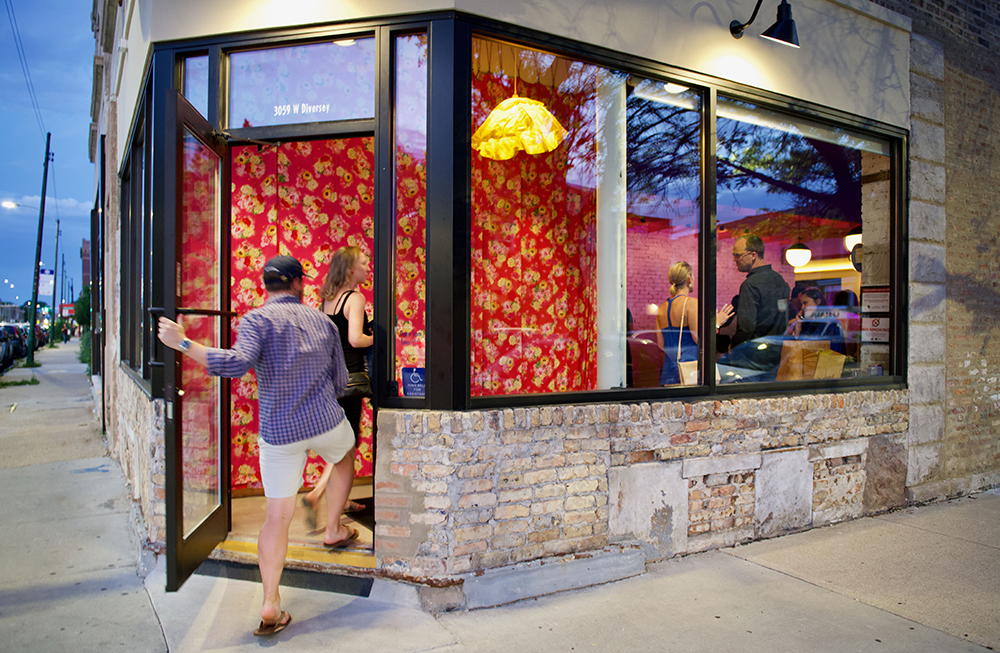 There’s a new restaurant on the block and it’s called Superkhana International (3059 W. Diversey Ave.). Some would describe it loosely as food from the Indian subcontinent but chefs Yoshi Yamada and Zeeshan Shah (co-owners with James Beard-nominated Chef Jason Hammel of Lula Café) would describe Superkhana’s concept as not having a concept.

“It’s very much the kind of cooking that Zeeshan and I were drawn to along with our culinary interests and explorations. Once you open the door to that, it’s a vast world of extraordinary cuisine,” said Yamada.

Chef Shah was also excited to create a restaurant that came from their shared histories and vast experiences with cooking, and the name fits the bill: Khana means food in Hindi.

“We wanted to create an environment that echoes the place that doesn’t exist in the world but is in our minds,” said Shah.

Both chefs come from multicultural backgrounds that have inspired their culinary interests. Shah, whose father is from India and has Minnesotan roots, was inspired by his grandmother’s cooking.

“I would be home alone with her a lot and I started cooking for the family,” Shah said. “I started working at restaurants by starting as a dishwasher, line cook, [then] eventually met Yoshi along the way and we started doing pop-ups.”

Yamada’s cultural roots and experiences also stimulated his desire to cook innovatively, he said, even though he does not have any Indian-specific roots.

“[When you have a multicultural background] you have a foot in two worlds just by being born that way—the merging of these worlds is very natural even though my worlds are Italian-American and Japanese,” Yamada said. “It’s a very natural evolution.”

One of Shah’s favorite meals to eat is Dal (lentils) with Ritz crackers representing the fusion of flavors and textures he grew up eating, which is seen in the Superkhana menu.

“We start with what we ate growing up and it turns into something on the menu,” he said. “Our Korma Meatball Pizza is a good example of that—there’s a korma I grew up eating and making with family that informed my perspective on it. Then Yoshi said we need to make a meatball pizza and kofta is like meatballs.”

The chefs’ ideas often snowball from there; Shah said they often have the same idea without talking to each other about it.

Both chefs believe that Superkhana represents India in multifaceted ways culinarily and aesthetically. Their menu is split between vegetarian and non-vegetarian with more vegetarian options representing India’s rich vegetarian cuisine. “It’s just how we cook, we cook with a lot of vegetables and vegetarian food,” explained Yamada. “We love meat so we cook with meat also but we take inspiration from the massive amount of vegetarian cooking in India.”

Superkhana’s menu is seasonal and inspired by the fresh and local vegetables sourced from farmers markets. Some of the highlights are: the “hyper traditional Vada Pao” (a deep-fried potato dumpling with chutney served on a bun), the Dokla & Corn, which is a “hybrid dish of traditional dokla and corn” (fermented rice and chickpea batter reminiscent of polenta) served with a distinct achaar aioli inspired by elotes.

“People are really responding to the butter chicken calzone, [which is] a riff on traditional Indian restaurant cuisine,” Yamada said. “We love it and everyone loves it—in part because of the joy of taking your naan and dipping it in the gravy. [Our cuisine] is all pretty heartfelt.”

Their beverages are also carefully curated by General Manager and Beverage Director Colleen Malone with a limited menu of cocktails, house cocktails, sparkling wine, and beer. One of their standout cocktails is the Greens and Tonic, which is a concoction of Apologue celery root, greens, and herbs, which can also be made non-alcoholic.

When you walk into Superkhana you are met with a light and airy décor designed by Charlie Vinz (Parachute and Cellar Door). The interior is meant to embody India in interesting ways.

“One of the access points was color and the vibrancy and depth of colors that are all over the restaurant,” Yamada said. They also have a fun patio to soak up some sun during our limited but lovely summer days.

While the menu is vast, Yamada’s advice is to try whatever you’d like and jokingly recommends trying the whole menu. They are also in the process of working on private party packages.

Coming Back Home to Logan Square

The multiethnic cuisine of Superkhana seems quite fitting for the diverse demographics of Logan Square. Both chefs also lived in and hung out in Logan for over a decade at establishments such as Lula Café and Whirlaway Lounge.

Yamada started cooking at Lula Café when they opened about 20 years ago and then transitioned to Blackbird. Yamada then lived in Mumbai for a year and a half on a Fulbright grant to learn more about Indian cooking, where he ate and learned as much as he possibly could.

When Yamada came back to the states, he met Shah in NYC where they bonded over their affection for Indian cooking. Once Yamada moved back to Chicago, he and Shah created pop-ups such as Bombay Breakdown, which was a residency at the Long Room Chicago. Shah then opened The Biscuit Man at the Long Room and after their successful pop-ups, they decided to open Indian-ish restaurant Superkhana.

In 2015, Yamada and Shah had a notable stand at the Farmers Market with chai and vegetarian/nonvegetarian items. They said they are now happy to be back in their old stomping grounds cooking the food that comes from their hearts and backgrounds.

“We felt really lucky to find this place—the building was in such disrepair and the landlords did a sensational rehab job on this place,” Yamada said. “Diversey Avenue is a very cool, interesting street with a little bit of the quiet of Albany Avenue. It’s away from the central buzz of Logan Square, but it’s not too far away.”

Superkhana is open at 5 p.m. Tuesday through Saturday and is kid-friendly/date-friendly. “We are both drawn to Indian food, it’s sort of how we cook as it’s global cuisine. We have dreamt of making a place that felt like a home for this kind food,” said Yamada.