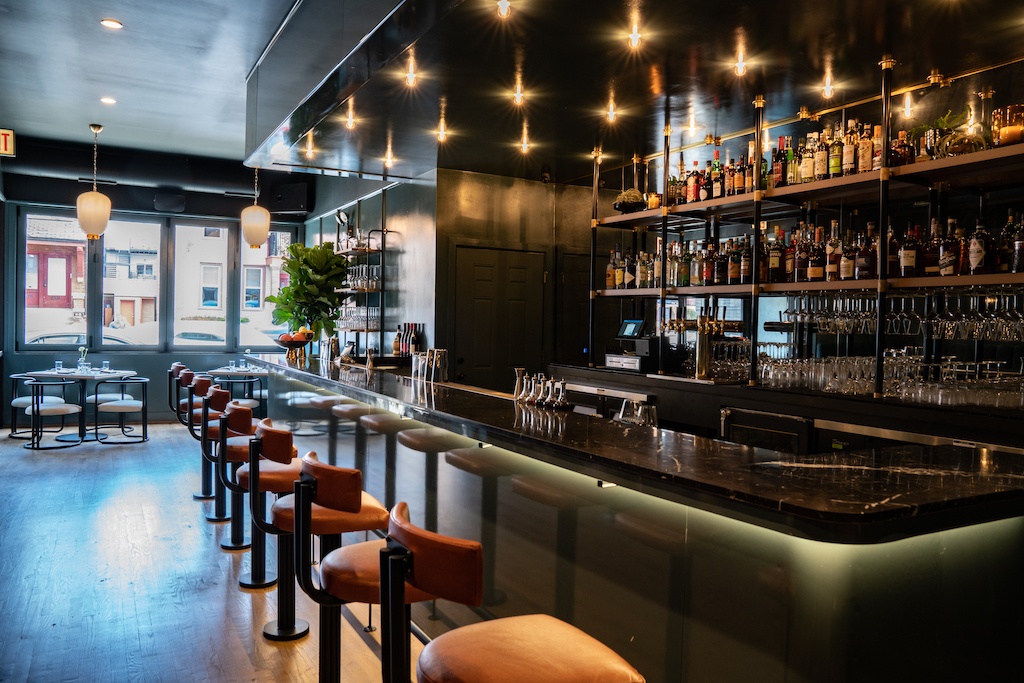 Have you heard of a restaurant that is both “New-American” and “Mediterranean” but is also a “sexy vintage supper club”? Good Fortune (2528 N. California Ave.), the new restaurant in the former General storefront is now open with its inventive twists on Mediterranean dishes using French and Italian techniques with seasonal Midwestern produce.

This new spot is the brainchild of Partner Andrew Miller (Honey’s, Fine Diving), Chef/Partner Charles Welch (Sepia, mk Restaurant) and Partner Hector Gonzalez (L2O, Spiaggia, Travelle, Honey’s) who were excited to bring their culinary magic to a neighborhood they care deeply about. The swanky 2,000 square foot space is reminiscent of a home-thrown dinner party with two distinctive, yet cohesive dining rooms.

Welch’s culinary training heavily influenced the concept behind Good Fortune. He went to a French culinary school where he learned a very specific method of French cooking, he said.

“It is about tasting as much as you possibly can, trying as many different combinations as you can and never settling,” Welch said. “It’s about seeing what else you can do with a specific ingredient and seasonal food while pairing this technique with the knowledge of French-Italian cuisine.”

He said the grassroots of his cooking has always been Mediterranean. From there, he took those concepts and the technique behind French-Italian cuisines and expanded it to other countries similar to that staple such as North Africa and Greece, he said.

“We are pairing Midwestern cuisine with some classic techniques and flavors that you would find in the Mediterranean region,” he said of Good Fortune.

One can better understand this blending of French technique with Midwestern produce and Mediterranean spices by taking a look at Good Fortune’s distinctive menu. Welch is especially excited about their Caramelized Halloumi because they have received so much positive feedback about it. It is a “simple dish” that showcases the “beauty and restraint” one can exercise with food. The halloumi cheese is seasoned with olive oil, za’atar, salt, and pepper, then roasted in a wood-burning oven. It is also accompanied with seasonal fruit like peaches and made with a green harissa yogurt giving a cheese known for its saltiness a hint of sweetness.

Good Fortune also has homemade pasta, showcasing their Italian techniques such as the Bucatini Grano Arso. They burn whole wheat flour, which gives the pasta a rust color and serve it with fresh heirloom tomatoes, crunchy breadcrumbs, and smoked mackerel.

If you’re a big elotes fan, they have a spin on elotes with their Roasted Corn and Ricotta Agnolotti. It is a buttery heaven with cotija and queso fresco in the agnolotti filling served with roasted corn, drizzled with zesty chili oil and cilantro.

“Obviously, corn, Chicago, elotes—it all makes sense—this is something we wanted to do a clever spin on with this flavor profile,” Welch said.

While the restaurant doesn’t have any vegetarian dishes in their large plates section, there are many vegetarian and pescatarian options in the small plates and pasta sections of their menu.

Welch takes dietary restrictions very seriously—almost every entrée is gluten-free partially because they use seeds instead of gluten for the texture to add an extra “dimension” to their dish. They are currently working on a gluten-free pasta, the team said.

The team behind Good Fortune has also put as much thought into their beverage menu as they have with their food menu. They have curated their wine program to embody the “old world meets new world” theme where Mediterranean meets Midwestern.

“We want to echo this meeting point with the wine,” said Welch. “We have very classic European wines that are old-world with more new-world, biodynamic wines. These wines also pair well with the food.”

Welch is also very enthusiastic about their cocktail program. Bar Director, Miranda Breedlove (Bad Hunter, Sportsman’s Club) has curated a tantalizing menu. A standout drink is their Gin and Tonic, which features their pineapple ice cubes in a proper gin and tonic glass. It’s Welch’s favorite cocktail at Good Fortune.

The Neighborhood and Space

The location felt perfect for Welch and Miller who really wanted to open a restaurant in the neighborhood they lived in.

“We saw that space and we were instantly excited,” Welch said. “It was down the street from where we both lived and we wanted to have a neighborhood restaurant and something that we can call home. “I am a firm believer that the space dictates the concept so we got in there, started sketching, and got excited about having the open kitchen concept and the wood-burning oven.”

The “sexy vintage supper club” vibe of Good Fortune came alive after the partners saw the space. Welch feels like the restaurant space is a “gem.”

Logan Square has always spoken to Welch, who is happy to be part of the ever-growing, award-winning and reputable restaurant scene, he said.

“It has been a dream of mine to live and work in this part of town where you know your barista and all the people that are coming to your restaurant,” he said.